How Will the New Karate Kid Movie Affect the Martial Arts Industry? 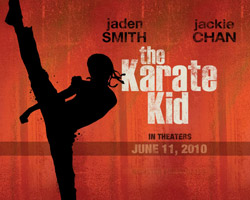 In 1984, "The Karate Kid" movie was released in theatres throughout the country. Martial arts schools all over the United States saw an immediate increase in student enrollment, and children everywhere wanted to dress up like Daniel Larusso for Halloween. The martial arts industry would never be the same.
Continue Reading
How to Choose a Martial Arts School for Your Child
Choosing the right martial arts school for your child can be a very tough decision. Most parents are very protective of their children and want to make sure they choose a nurturing environment which will be beneficial to their child's wellbeing. As a father and martial artist, I wanted to give a little bit of advice about this subject to help other parents in their quest for the perfect school.
Continue Reading
What is the difference between a Jiu Jitsu Uniform and a Judo Gi?

Recently, KarateMart.com began carrying some new lines of high quality Jiu Jitsu uniforms. We had always carried Judo uniforms in the past, but had never really considered carrying Jiu Jitsu gi because they are so similar and we didn't get many requests for them. Since adding them to KarateMart.com, one of the most common questions our customer service team answers is "What is the difference between a Jiu Jitsu uniform and a Judo Gi?". So, I figured this would be a great topic to discuss on our blog.

Continue Reading
A New Beginning
About six months ago, the KarateMart company sat down as a whole and began discussing the direction we wanted to take the company. While we have worked extremely hard over the past 30 years to build a wonderful company, we knew it was time to make some changes that would help us to grow into a more mature business.