If you've been sitting around thinking that 2014 has been sadly void of any new Teenage Mutant Ninja Turtles movie news, well, you aren't the only one. Luckily, fellow fans of the of the half-shell heroes won't have very long to wait. The first trailer for the Michael Bay produced Ninja Turtles is set to premiere on April 4th, before showings of Captain America: The Winter Soldier.

In related news, April 4th shall hereby be referred to as Probably The Day All Of My Joy And Childhood Dreams Are Carelessly Squashed Like A Grape, But Hopefully Not-day.
Continue Reading
Is New Martial Arts Armor the Future of Weapon Combat? 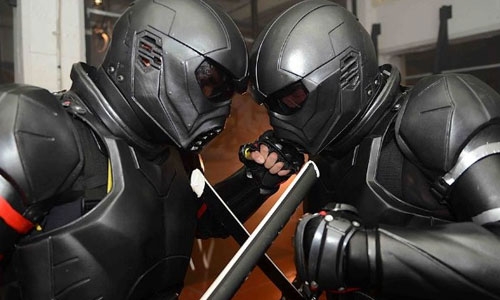 Not much (if anything) screams 'Future Ninja Combat' more than the picture above. What looks like a battle between two G.I. Joe super-soldiers is actually the newest brain-child of Unified Weapons Master, an Australian company that has its sights set on the future of combat sports. Their plan? It's called the Lorica, and if you think it looks like something Bruce Wayne would train in, you wouldn't be that far off.

Keep reading to learn more about how this one-of-a-kind suit plans to sweep the legs right out from under the world of combat sports.

Source: CNN
Continue Reading
Sticking To Your Plan: A New Year's Resolution Update for Martial Artists
Greetings web-wandering martial artists! 2014 is well underway and March draws nigh, so what better way to keep your martial arts plans on track than for a quick check-in?

If you're like us, right about now any New Year's resolutions you may have had a choke hold on are quickly looking for any opening to escape. It happens, but you don't have to let it. No matter how big or small your martial arts goals may be this year, you can achieve them!

Keep reading for a brief rundown of martial arts resolutions that may be on your list and the appropriate counters that will keep you on track for victory!
Continue Reading
What is Jeet Kune Do? Jeet Kune Do (JKD) is a hybrid combat system developed by martial arts icon Bruce Lee, whose legendary fighting talent shot this pint-sized phenomenon to fame in the 1970's. Trained in classical Chinese fighting disciplines, Wing Chun and boxing, Bruce diligently worked through these systems, but went on to develop his own style of fighting known as Jeet Kune Do or, The Way of the Intercepting Fist.

Favoring simple, unassuming forms with seamless chic movements applied at super speed to affect maximum impact, JKD took a bold step away from the exclusively rational (and largely unrealistic) approach of traditional styles. Although not developed as an improvement on Wing Chun or his other training, JKD became an exception which bested the rules from which it had evolved, and done so by virtue of its multiple fighting disciplines and the resulting intuitive adaptability which characterizes it. Its efficacy when applied in real life scenarios created JKD's definitive point of difference; this being that it was functional for real-life street fighting, since it operated beyond the limits of traditional training of the day.

The highly anticipated martial arts movie starring Keanu "I know Kung Fu" Reeves finally has a trailer, and boy is it worth checking out! From what I can gather, it's set in a fantasy world mirroring Feudal Japan. A grungy looking Neo Keanu breaks free from captivity, kills a Hogwart's troll, and teams up with 46 other awesome samurai to put a hurtin' on some Japanese dragon demons. So historical realism is obviously a priority here.

Honestly, I'm excited to check this one out (even if it did remind me at times of the bad taste left over from Sucker Punch). The action looks good and the cast is promising (it even has my favorite Shang Tsung in it). Now here's hoping the story is even half as good as this trailer looks.